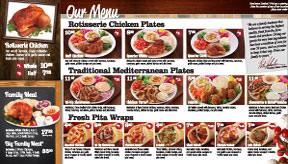 Most restaurants have a secret menu of some kind and Zankou Chicken is no exception. From Hollywood to Burbank, Zankou’s garlic sauce is well known but there are a few hidden gems that you won’t even find on the website. People trying to learn to make this garlic sauce might be one of the most popular searches related to the restaurant, but that’s not a secret we can divulge. Rumor has it, the recipe is locked in a vault somewhere.

The restaurant can trace its roots back to the 1960s, but the family brought the franchise to Los Angeles in the 1980s. Their menu grew significantly thanks to that garlic sauce, opening up an entire group of Middle Eastern and Mediterranean foods to the US public. They were one of the first restaurants in LA to bring these kinds of tastes to the people.

Today, Zankou is like pop culture and their menu has a few hidden secrets.

Try asking for a “Fele 3” next time you go if you like falafel. The restaurant will make you a falafel wrap that has three of the crunchy balls, instead of the usual two.

One thing that makes Zankou unique is its diverse sauce and flavor combinations. From tahini dressing to garlic paste and hummus, you’ll want each bite to taste different. To that end, you should ask for your meat in foil. The restaurant will wrap your meat separate from the rest of the plate and you can sample all the various flavors on your own.